Looks like I haven't posted here in over a year. All of the usual excuses are to blame, real life etc etc.....I'll spare you the details. I've done a hell of a lot of hobbying in the past year though and I think it's about time some of that made its way on to the blog. First off I want to share a few kitbashed Adeptus Mechanicus characters I've added to the ever growing army.

I made this guy out of a bunch of different parts but the bulk of the model is based on the Blackstone fortress navigator. I added a head from a skitarii ranger as well as a few other Mechanicus parts. I think he fits the role of Tech Priest Daedalosus quite well but could possibly also be used as an Enginseer.When the Skitarii Marshal was released I knew I had to try kitbashing my own version and I happened to have a couple of Necromunda Cawdor bodies hanging around for just that purpose.
The first of these is heavily inspired by Muttork over on Instagram. As soon as I saw his incredible work I knew I wanted to have something like that in my collection. 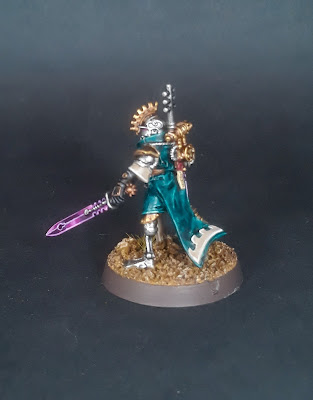 I've been working on my blending and I'm pretty pleased with the swords on this guy. There's still a few points I'd like to improve, so I'll be sure to practice and paint some more power swords!
For the second Skitarii Marshal I pretty much just started with the Cawdor body and added Mechanicus parts until it looked right. I'm very pleased with this one too even if he lacks the wow factor of the sword wielder.
That's just a taste of the Adeptus Mechanicus models I've painted over the past year. Hopefully I'll get back to posting on the blog regularly and be able to show the rest of them off in the coming weeks.
Posted by Ed OMalley at 08:07